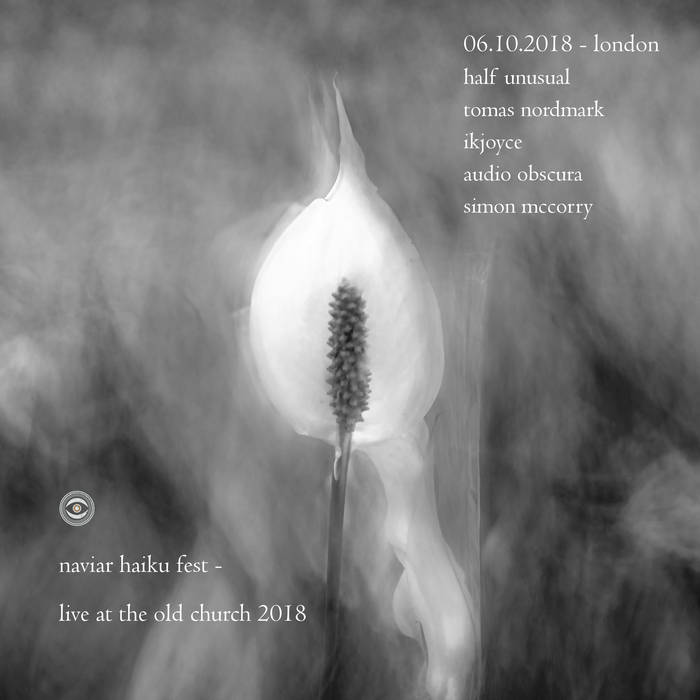 The performances included in this live album were recorded during the third edition of the Naviar Haiku Fest, in London, on the 6th October 2018.

The Naviar Haiku Fest 2018 started with an introductory workshop to haiku in the morning, followed by a series of talks and panel discussions focused on creativity and ‘arts-meets-science’.

The Haiku Fest ended with five live performances by members and friends of Naviar Records, working in the fields of ambient, electronic and contemporary classical music.

According to Jane Reichhold, the ‘hai’ part of ‘haiku’ translates to ‘joke’, ‘fun’, or ‘unusual’. halF unusuaL is Darren Bourne, whose musical career to date has included international sound engineering, production, performing and writing credits across a variety of genres and platforms from pop to film music and sound design to contemporary dance and theatre. His current obsessions are chance and the boundary between music and non-music.

Artist and composer Tomas Nordmark makes contemplative and somewhat cinematic music based partly on ancient northern European hymns, with a minimalistic phase-shifting compositional technique. Inspired by the writings of cultural theorist Mark Fisher and the concept of a lost future, Nordmark uses the ancient textures with a critical perspective layered with a notion of bypassing the contemporary stasis.

Nordmark recently released the first track from his upcoming album via the NYC based label Valley of Search (www.valleyofsearch.com).

Audio Obscura performs Lap-top based electronics for the ears, haunting the wide spectrum’s of electro-acoustic music with a firm footing in the ambient realm. The sound also strays towards the experimental; musique concrète, idm with post-classical minimal leanings occasionally push through.

Neil has summed up the Audio Obscura sound as thus;
“Light is, to the camera obscura, as sound is to Audio Obscura”

Simon is a cellist & composer based in Stroud, Gloucestershire. After playing in several bands as a bass player in the 90s he started making music and sound design for theatre, contemporary dance and film. He has worked with visual artists creating soundscapes for installations and exhibitions, defining space and feeling with sound. Also releases work as ‘amonism’ combining influences of modern classical, free improvisation with electronics & field recording.

Naviar is a community and label that explores the intersection between music and traditional Japanese poetry.

Bandcamp Daily  your guide to the world of Bandcamp

Guests include Kassa Overall and Muriel Grossman, plus an LP of the week by Van Hunt.