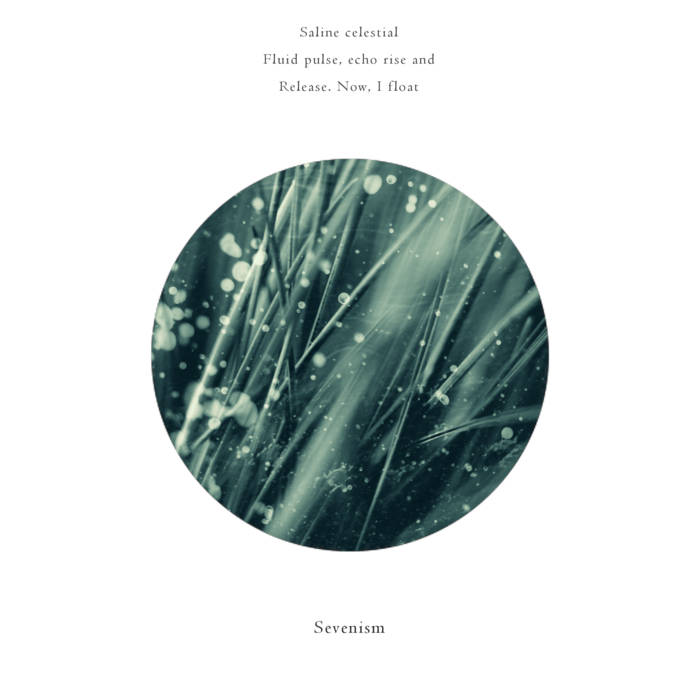 Andrulian At its heart Saline Celestial is an ambient / soundscape album with cinematic qualities and a captivating sound. The production is excellent, each sound has room to grow and evolve but there are also subtle hints of tension and dissonance and great movement in the sounds. Favorite track: Humid Afternoon.

Past Inside the Present

Music Won't Save You

Mystical liquid landscapes painted with the medium of music.

The first solo album published by Naviar Records is from a member of its community, Sevenism (soundcloud.com/sevenism).
"Saline celestial" brings together intricate soundscapes, haunting atmospheric textures and calming field recordings in an expressive, emotive and spontaneously deep concept album: close your eyes, and let the journey begin.

From within a desolate space of mind comes this new offering from Sevenism; a realm of icy resolution and isolationist design. Despite the brevity of this record it is one which lingers in a person’s mind long after the last seconds of it have played.

I’d been exposed previously to this artist via his contributions to Naviar’s Haiku and Renku compilations but now that he’s out on his own I have to wonder why it took so long. This really is a splendid collection of frigid ambiance, nothing has been left to chance with progression after progression mapping out the sonic terrain. We have an incredible view of this place thanks to his efforts, there is a softness to all of this I haven’t encountered in years. Generally, when this sort of darkness is summoned on album there’s a tendency to clutter things up with the sounds of broken machinery or perhaps strident political samples.

Here, in an aquatic wonderland of intimacy you will find only escape and ultimately reflection. At the bottom of the blackest sea there is no current, no light and no need to provide exposition as to why things are as they are; only an oily undertone of ancient vintage can be ascertained. It is best to close your eyes while this plays and keep any possible distractions at bay… Sevenism’s vigil here is a stately meditation on that which cannot be perceived through tactile means but is potent in it’s influence upon the perceptions of those who are listening. I know some are going to be wondering just what I’m getting at here but it remains imperative that each individual who partakes of ‘Saline Celestial’ come to their own understand of it.

Each of us have within our sphere of influence a range of emotions we keep buried and hidden from those around us and if we’re cunning enough even from our selves. Sevenism’s tracks possess the ability to tap into this occult range of feeling and bring both sorrow and serenity their respective time in the sun. No longer confined to the shadows, they rise.

Naviar is a community and label that explores the intersection between music and traditional Japanese poetry.

Bandcamp Daily  your guide to the world of Bandcamp

Cannibal Corpse's George "Corpsegrinder" Fisher stops by for an interview